"To interpret what we see before us, to distill its essence, to point out the wonder and omit the mundane, these are the greater truths that make up the artist's long and honored tradition"  Ted Goershner


Photos are great for bringing the memories back. They are great in a photo album or a slide show....memories of times past.  But photos are not always so great for painting references. Especially if we try to copy exactly what we see.  Do you ever put something in a painting just because it was there in the photo?  Do you ever have to explain something in your painting by saying "it was like that in the photo".

I think we are all guilty of this at some point but as we learn and grow as an artist it becomes easier to let go of the photo and just use it as a starting place....as inspiration.

Today I am sharing my reference photo for this painting to show you how I chose to interpret it.


The photo has some problems common to bad photos. More on this in a future post.

What do I like about the photo:
Now look at the work in progress photos and detail photo below to see how I resolved these issues with the photo. 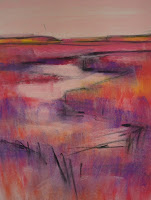 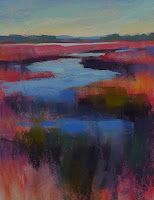 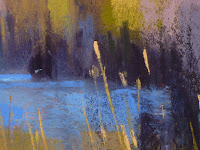 Email ThisBlogThis!Share to TwitterShare to FacebookShare to Pinterest
Labels: demo, getting started with pastel

Thank you for your daily paintings.
they are very inspirational and today's has some great hints to correct the bad photo effect.
Thsnks Nan in Australia

This post is so very helpful! I'm a new pastel painter and I struggle with breaking free from merely copying my photo references. I suspect this is due to timidity and the drive to "get it right!"

So helpful! Thank you for your generosity in explaining what you did and why.