Art Play Activity: Do a Monochromatic Painting with your Least Favorite Color

Today my challenge was to paint something in a monochromatic scheme.....one color ......but it had to be my LEAST favorite color. The hardest part of the challenge was to choose the color. I like all colors! As I looked at my big box of pastels I realized that my least used pastel was the orange family. Most of my orange pastels were hardly touched except for the lighter values. So orange it was.

I began the painting gray sanded paper with a black wet wash. I used Art Graf pigment squares and water. I thought that using black would be neutral but give me a good value roadmap.

As I painted I realized why my orange pastels were not used very much. Orange in the landscape is great as spice or under green but a bit overwhelming in large amounts.  I wasn't thrilled with the painting. It was just too warm. There was no relief. Here is the painting at that stage of overwhelming orange. 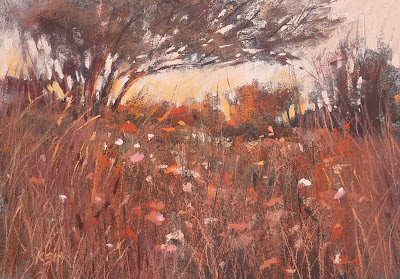 So I cheated. I took out a blue pastel and used it to cool off some areas in the painting. I scumbled some blue over the distant trees and in the shadows of the grass. I added a few blue shapes in the grass to suggest flowers in the shadows.  You can see the difference a little bit of cool does to an overly warm painting.

TIP: Equal is boring in a painting. Having all of one thing such as temperature is boring. Having equal proportions of something is boring. Try for unequal amount for the most compelling painting.
Posted by Karen at 5:36 PM