The Most Important Thing about Creating Depth in a Landscape Painting


It was another one of those 'AHA' moments.  I love when that happens. When all  of the sudden someone says something about painting and it clicks. Sometimes it is cumulative.  You read about a painting concept and hear instructors talk about it and when it finally clicks....all of the stuff you stored away begins to make perfect sense.

It happened like that for me with the idea of creating depth in a landscape painting. I understood the principles of Aerial or Atmospheric Perspective. I could recite the list of things that happen as we view things through the layers of atmosphere. But I didn't really put it to work in my paintings as well as I could have.

Here is what did it for me....the idea that we are putting on a show and sometimes need to exaggerate things. This idea is probably cumulative with a lot credit going to the wonderful instruction of Richard McKinley and Stan Sperlak and my first teacher, Marsha Savage. It took a lot to get this concept drilled into my brain!

To quickly review aerial perspective... the appearance of things change as they recede into space due  to the influence of the atmosphere .....colors get lighter and cooler and less intense, detail is lost, edges become softer. The more stuff ...moisture, pollution...in the atmosphere, the more pronounced the changes.


My reference photo (above) didn't really show the cooling and lightening of color and values. It didn't show the loss of detail. The green in the foreground looks like the same color green as in the background. I decided to push these effects and exaggerate them. I also added some yellow flowers and made them get smaller and duller as they went back into the picture....another way to create depth.

Email ThisBlogThis!Share to TwitterShare to FacebookShare to Pinterest
Labels: getting started with pastel

Exactly! I reached the same feeling about still lifes last night. If the set up doesn't have enough drama, I need to exaggerate it! I know I have to work on that with my landscapes too.

Thank you for the very clear and concise reminder. It has been a few (winter) months since I've painted a landscape. No doubt I've forgotten most of what I once knew...especially since I am playing more in an effort to balance my life to include more joy.

How true, Karen and well illustrated with your painting! Hard to believe that your painting is only 5 x 7. The sense of deep space makes it seem like a much larger piece.

I really love the texture in this one, too!

Thanks Karen - I needed that! Your painting is sooo much more interesting than the photo!

This is a great painting. It's alive with color and life.

One of the things I love about your paintings is that while you've learned a lot from teachers like Stan and Richard McKinley, your work is all your own. So frequently I see work by artists who have taken a class or classes from McKinley and their paintings are clones of his style. 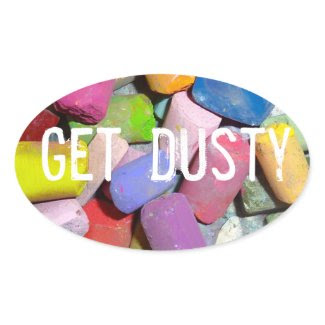