How to Paint a Bright Overcast Day

It was an interesting day. Cool and overcast but there was a brightness to the sky that promised clearing weather. I was drawn to the photo I took because of this interesting light and mood but I wasn't sure how I would portray it. The value scale came to the rescue! 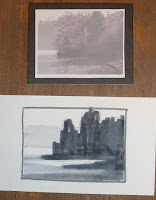 As I looked at my photo and recalled the day I realized that there were no strong darks in the scene. It was so bright that even the dark trees weren't actually dark. That was my answer! If I wanted to capture the feeling of the bright overcast conditions I would need to paint in a higher key.....meaning I would only be able to use the values on the light end of the value scale. All the pastels I used would need to be middle value or lighter. My darkest dark would actually be a middle value!

I did a four value thumbnail sketch with my grayscale markers. I then selected a few pastels that would allow me to see the values I would be able to use. I made some test marks on the value study. I realized that the top blue mark was too dark. It was good to see the test mark so I made another selection for my darkest dark and tested it. It was much better. The test marks helped me select the correct values for my painting.

Note: the very dark test mark on the upper right is a Terry Ludwig eggplant just to show you the darkest value on the scale. I can't use this one! 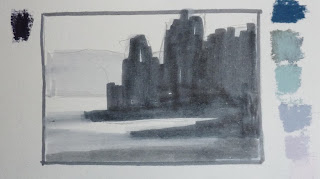 The photo below shows my first layers. I used the section of pastels I selected for my test marks. Now I knew the extremes of value that I would be able to use. The rest of the painting was just a matter of layering other colors that were the same light to middle light values that I had already established.
I did add some tree trunks and branches with vine charcoal so these darker marks are small accents in my high key scene. High Key did the trick! 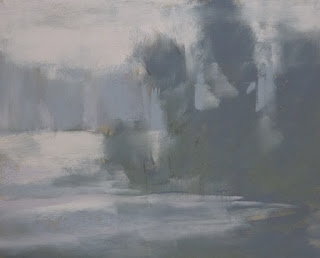 What's Happening on Patreon?
This week's challenge is to paint a scene in high key. We also have a new private Facebook group which is off to a great start. I am so excited to see everyone share and support one another. Consider joining us over on patreon and Facebook . www.patreon.com/karenmargulis

I can feel the moisture settle on my skin in your mist painting. The high key and muted hues combine to give that sense of heavy overcast, where the clouds are right down on the ground. Well done!