How to Paint a Waterfall New Video Release!


New Video Release! How to Paint a Waterfall.

Last June we spent a month on Patreon exploring techniques for painting water. One of the video demo showcased a fun way to suggest rocks, water and foliage of a woodland waterfall. I am releasing the video today to my YouTube channel. All of the water lessons are still available on Patreon! Join us if you like this video!

Here is some more information on how I painted the water:

I took a pair of scissors to this painting but not for the usual reason. Usually we take out the scissors when we want to crop a painting to make a more interesting composition. It is so easy to cut pastel paper and get a few good paintings rather than one failure. But this time I wasn't using scissors for cropping.


How did I use scissors? I was adding the finishing touches to this waterfall. I realized that in some areas of the rushing whitewater the pastel was too thick and covered too much of the rocks. It didn't look natural. I wanted to have some of the rocks peek through to make the waterfall a bit more delicate.  I looked around my easel and spotted a pair of scissors. Perfect!

I used the tip of the scissors as a scraping tool. I started scratching through the light pastel (the whitewater) which revealed the rocks and toned paper underneath. It was just the right touch and allowed the waterfall to appear painterly rather than overworked. If I had added more rock color rather than taking away the water it would have potentially looked overworked and muddy. 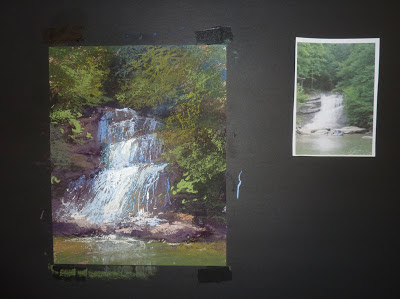 Join us on Patreon. www.patreon.com/karenmargulis
Posted by Karen at 8:04 AM