What do you do when the shopping and wrapping and baking are done? Go down to the studio and paint! I put on some Christmas music and pulled out a photo that I took after one of Atlanta's rare snowstorms. It is hard to believe that this winter wonderland was our street! The sun had come out after the storm dumped inched of heavy snow. We went for a walk and watched the magical transformation as the clouds cleared off and the sun began to illuminate the snow. I took a few photos and filed them in my winter photo file. Today was the perfect time to paint this scene!

Step One:
I began with a 9x12 piece of Canson Mi-Teintes unsanded paper in Moonstone. I did a light drawing with a piece of blue Nupastel placing the main shapes. The star of the painting would be the evergreen tree covered in snow. Next I used three blue pastels to do a bold block in. I used a dark blue for the dark tree shapes and the path in the snow. I used a light blue for the sky and a cool blue gray for the foreground snow in shadows. 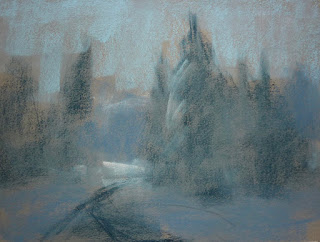 Step Two:
I add layers of color to my tree shapes. I used a couple of violets and some dark greens. My plan was to block in the dark trees first and then add the snow....like frosting a cake!
I also add some dull mauves to the frosted trees on the sides of the treeline. 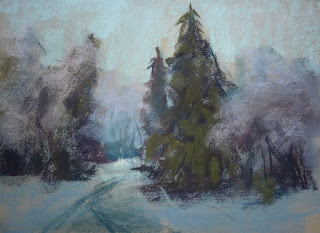 Step Three:
Next I work on the sky. It was a beautiful blue sky and I use three different blues to Crete a sky with depth. Later on in the painting I add a pale yellow to the horizon to suggest the warming of the sky. At this point I needed to develop some texture in the lacy trees so I spray workable fixative and add more light blue and violet over the fixed areas. This created some suggestion of branches covered I snow. I repeated this process a few times.

Next I added the light snow blanketing the evergreen trees. I used pale blue in the shadows and pale peach and yellow in the sunlit snow. I press hard to get thicker marks.  I also worked on the foreground snow and the path. I used cool blues since this part of the snow in the foreground was still in the shadows. I used pale peach in the distant snow where the sun was hitting. 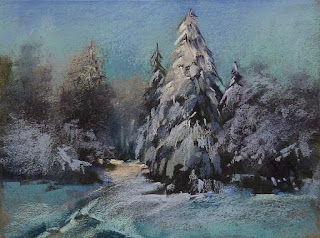 Step Four:
Everything was in place. the last step was just a matter of refining the painting. Look at the photo move and compare it with the finished painting below. What finishing marks did I make? 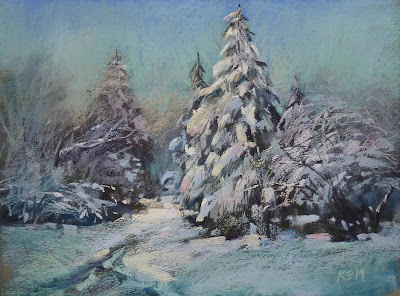 Wishing you a very Merry and Peaceful Christmas!